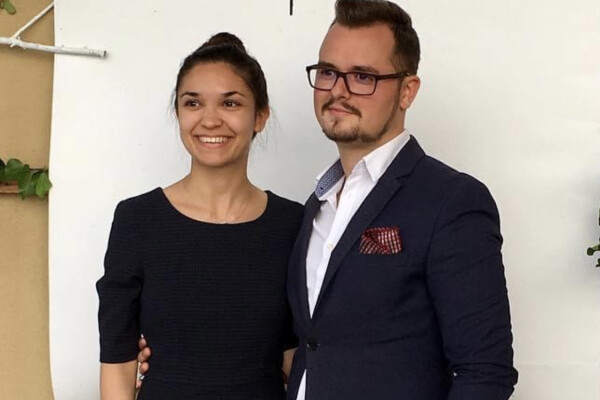 In 2000, The Orchard, along with ten other churches, invested significantly toward the purchase of a property, the former Olimpia movie theater (now the KMK), to be the home of the Foundation and other Christian ministries. Former Budapest City Team Leader, Mark Revell says, “There has been a long season of prayer since that beginning with many people involved in praying for God to raise up leaders to take the Foundation into the next season. Leaders who bring a mix of business knowledge as well as a heart for ministry and desire for people to know Jesus.” In answer to this prayer, Bence Farkas has become the first Hungarian leader of the Foundation.

Bence says, "The KMK and the people associated with the Encouragement Foundation have played a significant role in my life. For years, this is the place where I went to church and attended home group and Bible school. I even met my wife at one of the youth conferences. I am one of the many people for whom the Encouragement Foundation and its ministries have been such a blessing.

Two years ago, the Lord started stirring up something in our hearts. My wife and I felt this calling toward ministry. I had my own business, but I felt this call from God toward ministry. After a period of prayer and counsel from others, God showed us that the KMK was the place for me. I left my job and started working at the KMK. The KMK functions as a Christian community center. What makes us unique is that we are the only interdenominational Christian community center in Budapest. This allows us to form relationships with different churches and organizations. In addition to the KMK hosting events like conferences, concerts and plays, there are five churches that use our facility! The most exciting thing about them is that four of those five churches did not exist five years ago. There is a church planting movement taking place in Hungary. Also, the only interdenominational Bible school in Hungary is based out of the KMK. The biggest project in the building is the Montázs Art Café. Two years ago, the Café made it to the top two cafés in Budapest!It’s for moms with babies, student ministries workers meeting with students doing discipleship, guys coming in after work; it’s such a living hub and meeting place for Christians in the city. The Café was launched with the motto to bring people together, and it’s exciting to see that happening.

We see opportunities to build churches and help them reach communities. Our unique interdenominational standing frees us to be a place where all these churches and ministries can find each other and have a platform to work together. I’m super excited to see these alliances made. The Foundation can be there to soften the things that traditionally might divide believers and movements. One of the biggest recent changes is that RG is stepping out of leadership of the organization. Our relationship with RG is becoming more of a partnership, so we can work together more efficiently because we’re not dependent on RG anymore. This new partnership is where we’ve been headed for so long. It’s like seeing your kid finally growing up! There’s a lot of gratitude for what God has done."

If you want to know more about missions at The Orchard, contact Brad Mullet.